Israeli Ambassador to Chile: “Water is vital for agriculture and forms the basis of our diet” 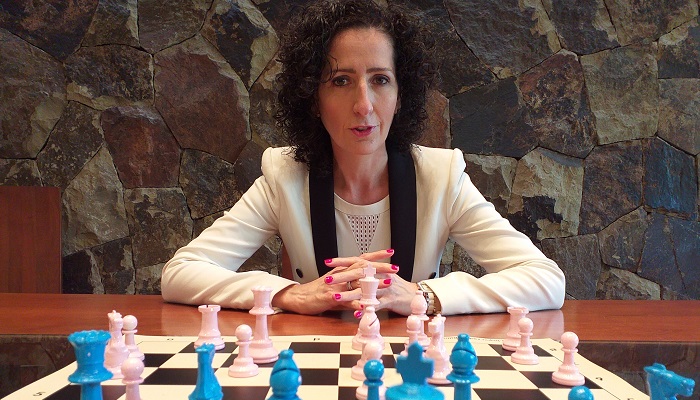 Chile is facing one of the most prolonged droughts in its history. The amount of rainfall in the country has been in decline, which has made the water crisis a major problem for the agricultural industry.

The Chilean Ministry of Agriculture, Antonio Walker, has emphasized the importance of tackling this problem and has assured that “without water, there is no country”, as this precious resource is essential for food production.

Experts say that once the country has overcome the Covid-19 pandemic, the water crisis will be the next major challenge.

In that regard, the Israeli Ambassador to Chile, Marina Rosenberg, has highlighted the importance of individuals working together to make a difference in order to overcome the challenge, stressing that “water is vital for agriculture and forms the basis of our diet”.

The following interview has been translated from Spanish.

What are the geographical and climatic conditions in Israel that create water shortage problems in the country?

Israel is a country with very low rainfall, with almost none in the far south of the country where the Negev Desert is, and in the north there is around 250 milliliters annually. In addition, we have one single source of freshwater – the Kinneret Lake, or the Sea of Galilea. In summary, we’re talking about an area that is 60% desert and with limited aquifers.

Broadly speaking, how has the country been able to develop its agricultural industry and overcome the water shortage over the years?

Since the birth of the State of Israel in 1948, one of the main challenges has been self-sufficiency, as the geopolitical situation has made trade with nearby countries very difficult. Therefore, the plans for agricultural development and water management have also formed part of public policies. Water is vital for agriculture and forms the basis of our diet.

What are the main techniques or solutions that have been used to meet the demand for water?

Israel’s strategy to face the water challenges can be resumed as “centralized and multi-focused”. In other words, we have a national authority in charge of water that coordinates all the actors and areas of focus, including production, prices, demand, incentives, technologies, legislation, etcetera. And on the ground, we can say that Israel’s success in this regard has been based on concepts like water saving, reuse, and new sources of production.

Does the Water Authority also have a role in finding new sources of water?

The Water Authority has a very important role in the long-term strategic planning of the country’s future needs in terms of human consumption, agricultural production, emerging industrialization, and other needs that could arise.

With this estimate, it can identify the sources of water – where the water comes from – and also the destinations – where it will go. There is an important link between origin and destination. For example, reused water is generally used for agriculture and irrigation.

In Israel, desalinated water is provided for human consumption and specific industrial processes. This planning allows costs to be managed for treated and quality water for consumption and energy use, and also to precisely plan the future tenders in plant materials and treatment technologies so that neither human consumption nor agriculture is affected.

The Israeli example for Chile

Could these solutions you mentioned be implemented in Chile?

Of course. In terms of saving water, Israel was a pioneer in the development and use of drip irrigation, which is now widely used around the world and present on many Chilean farms.

As for the reuse of water, Israel, through its treatment plants, treats and reuses almost 90% of the municipal water, and in Chile undoubtedly this experience can be duplicated, reusing water that is already treated in the different regions.

Lastly, on the subject of production of new sources of water, in Israel this has been done using desalination, generating more than 60% of the country’s potable water, which without doubt demonstrates that Chile could find an answer to its problems with this technique.

In any case, as well as the technified irrigation, desalination and reuse, there are other technologies that reduce the amount of water lost in transportation – amongst other areas -, satellite technology for leak management, which has helped Israel to have less than 10% loss – a very low figure in comparison to other countries, but one that can still be improved upon.

How well do you think Chile is facing the water shortage?

We have seen that the authorities have a great interest in tackling this topic in-depth, which has translated into numerous invitations to Israeli experts and consultants in the development of private projects between the countries, in academic cooperation, and in the creation of memorandums of understanding to tackle this challenge.

How important is it for a country to be conscious about the management of water, its use and reuse?

It is vital to be able to support decisions that will involve public policies and finances. And, on the other side, the sum of individual actions can make a difference. In Israel, for example, it is unthinkable for a child to brush their teeth with the water running, or for someone to wash their car with a hose in the street. And this is because of the education on the saving of water is very strong for all citizens and companies too.

In what way could people be made more conscious about the use of water in Chile, taking into account examples from Israel?

I believe that during this 10-year drought, a new consciousness has been created. And obviously it’s important to invest in education and public campaigns. In fact, through bilateral cooperation, a few months ago Israel handed over to Chile a campaign called “Israel is drying up”, which was adapted and implemented locally for television by the Ministry of Public Works. Additionally, we are promoting cooperation in this area with different national and regional institutions.

Do you plan to become involved with the water problems in Chile, providing advice based on your experience?

We like the idea of cooperating and sharing, more than giving advice. While Israel resolved the issue of water some time ago – due to the fact that it always had a shortage – Chile is working very well, and the coordination of efforts between the government, lawmakers, universities, and private entities will surely provide positive results in the short-term.

Rosenberg will participate in the upcoming Agricultural Water Summit, the first event that will tackle the water crisis that the agricultural industry is facing in Chile and the rest world today. The event will take place in San Francisco de Mostazal on April 20, 2021.

During the day, numerous leading experts from around the will analyze the current situation with water and will provide solutions, drawing on successful experiences in other countries and highlighting the role of innovation and technology for the management and preservation of water in agriculture.

Rosenberg said that the space that the Agricultural Water Summit creates will facilitate essential discussions between different actors related to water regarding the impact that the drought is having on the industry.

“This event also serves the important purpose of bringing the different water resource management technologies into the Chilean ecosystem, linking together the different challenges that the country is currently facing, and sharing the experience that has been gathering in countries like Israel,” she said.