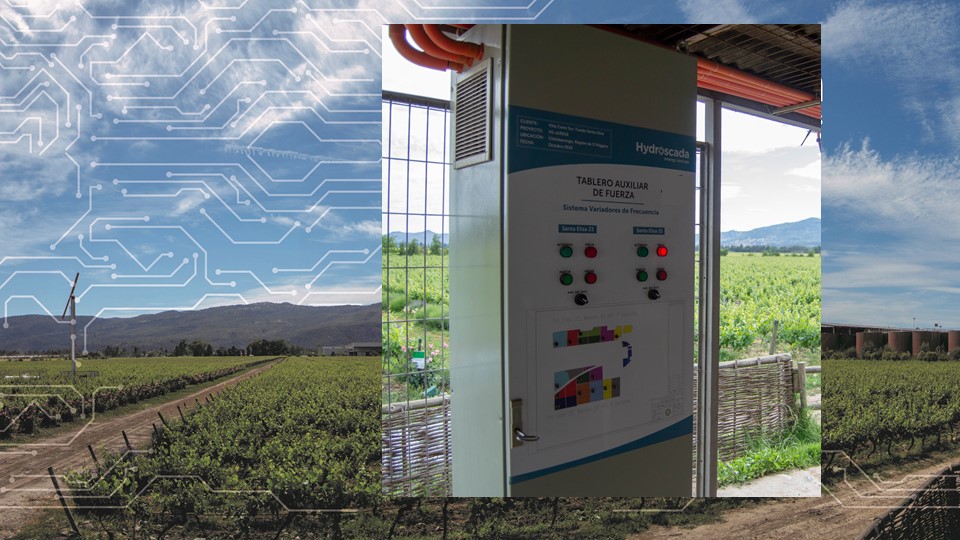 A company Chile has developed award-winning technology that can provide significant savings on water and energy consumption.

Hydroscada offers integrated solutions to large agricultural operations, allowing them to see in real-time exactly how much water is being used throughout their farms and facilities, and to make improvements and increased efficiencies where possible.

Company representatives say it has so far helped customers to optimize water consumption in their irrigation and well extraction systems.

It also offers companies the ability to measure energy consumption, thereby greater reducing the energy bills and making the operations more sustainable, achieving energy savings of up to 65.7%.

In addition, its Effective Extraction Monitoring System (MEE) solution for wells and open channels helps users to comply with new regulations being implemented in Chile that require reporting of water consumption amid a severe drought in much of the country.

Speaking with FreshFruitPortal.com ahead of the Agricultural Water Summit, the company’s Commercial Manager Arturo B. Valdés explained that Hydroscada had initially been focused on irrigation systems after it was created in 2002. But since then it has evolved significantly with the development of technologies that help Chilean companies face both high energy costs and the effects of climate change.

In 2017, Hydroscada won the Avonni National Innovation Prize, in the ‘Entel Digital Solutions’ category, for its ‘Water Rights online’ project. With it, energetically autonomous hardware and software can be used to measure flow rates and water levels.

“The award was for a water flow monitoring system, which allows the farmers to know how much water they are actually using, how much they are entitled to, and how much actually enters their fields,” Valdés said. “There the whole story behind Hydroscada came together – the Internet, a platform, and measurement.”

He explained that many farms lose huge quantities of water due to problems in their canals, for instance due to rocks obstructing the channel. On large farms with an expansive irrigation system, this can be especially problematic and difficult to monitor.

“This product is therefore very useful for farms that have a lot of irrigation canals, to be able to monitor them in real-time,” he said.

Since 2019, Hydroscada has been part of the ecosystem of telecoms company Entel Ocean to “massify and strengthen” the SGE remote monitoring technology. They have been working closely together since then, developing MEE systems for water in wells, to help companies comply with new regulations currently being implemented in 10 regions by the General Water Directorate (DGA).

Due to the severe drought being experiencing through Chile’s central and northern regions, the DGA is requiring that all farms and farming companies measure and regularly report exactly how much water they are using – a system that Valdes says many farms do not currently have.

He says that digitization will allow agriculture to be empowered to increase its productivity while complying with the DGA regulations. The solution offered by Hydroscada and Entel Ocean ensures connectivity and reports, in addition to including alarms and real-time data as a management tool, to achieve efficient use of water.

The company has also been installing its MEE systems on the farms of major Chilean agricultural companies and vineyards.

Aside from its almost two decades of expertise, one of Hydroscala’s unique selling points is its offering of an integrated, value-added system, as well as its experience across many areas. Unlike many other companies, it covers the measuring of both energy and water consumption across a farm’s entire operations.

“We are a little bit like the primary care doctor for the agricultural industry,” said Amparo Dominguez, Head of Innovation and Marketing at Hydroscada.

“Nowadays there are lots of technological solutions, and what Hydroscada does is bring them together through alliances in an integrated solution.”

Tackling the water crisis in Chile

Asked what they believe is necessary for Chile to do in order to overcome the water crisis, which is already crippling parts of the agricultural sector, the Hydroscada representatives said that it is essential to monitor water consumption and know exactly how much everyone is using.

“In that sense, I think that what the DGA is doing is the right thing, and it’s what must be done,” said Valdes.

“The first thing that has to be done in any shortage is measure. Measure how much is being used, know if you have a right to use it, and confirm if you’re using it efficiently. That’s the first step in all this, and it’s what the DGA started doing last year. Now it’s beginning to carry out inspections.”

He also explained that although Chile has been under drought conditions for many years, a lot of farmers are beginning initiatives to look after water.

“There are improvements that can be done very easily and very quickly that allow you to save water,” he said.

Dominguez added that the industry is facing a scenario in which it must produce more food as the population grows but with a more efficient use of water.

“Crises such as this are an opportunity to grow and readapt,” she said, highlighting the need to not just save but also reuse water – such as gray water, the majority of which goes to the sea.

It is important to learn from other countries and regions that have been successful in developing and implementing technologies to save and reuse water too, she said, such as Israel, Australia and California.

“We’re not talking about reinventing the wheel, but bringing technology that has been proven to work elsewhere,” she said.

Public-private partnerships will also be essential to overcome the major challenges, with all stakeholders working together to find and implement solutions.

“In Chile there is lots of innovation and lots of talent, but we also need to see how other more developed countries have overcome these challenges, and that is why we want to be in the Agricultural Water Summit,” she said. “We have invested a lot in innovation and developing technologies, and we are consolidated, so we want to contribute with these proven solutions and massify them.”